Three years ago I bought my first velomobile. I would like to tell you why I sold it, why it became a Milan SL and about my experiences after the first 2,500 kilometres.

Why buy a new velomobile?

I have ridden around 10,000 kilometres with my DF from Intercity Bike in the last 3 years. Apart from the odd puncture, there have been no technical defects. The DF ran absolutely reliably and yet I sold it again! Why? Quite simply: life is too short to ride only a velomobile! 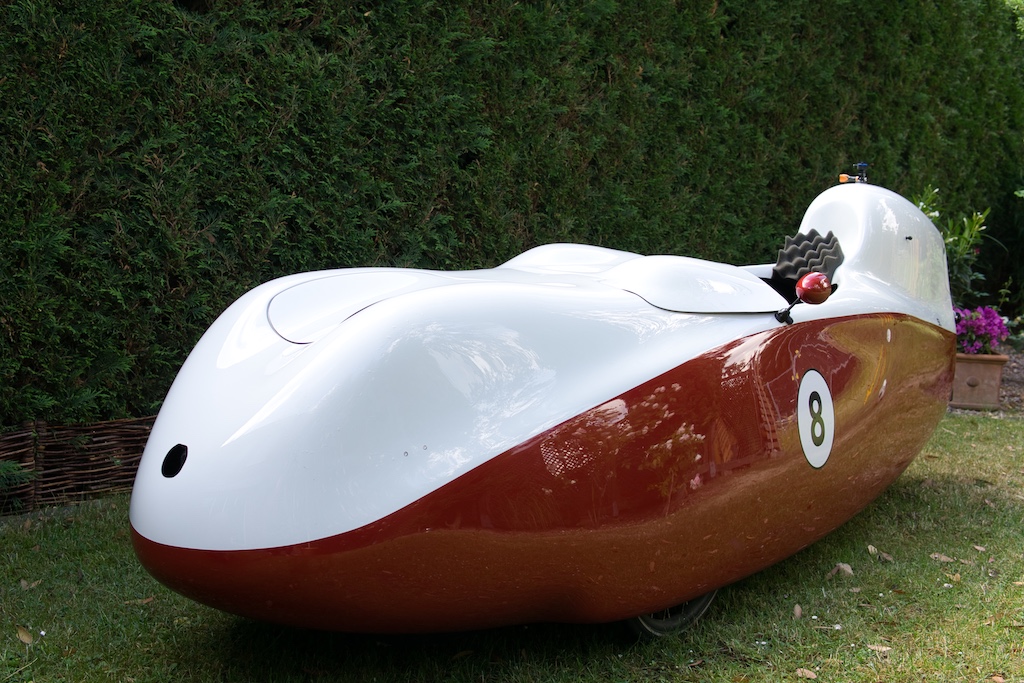 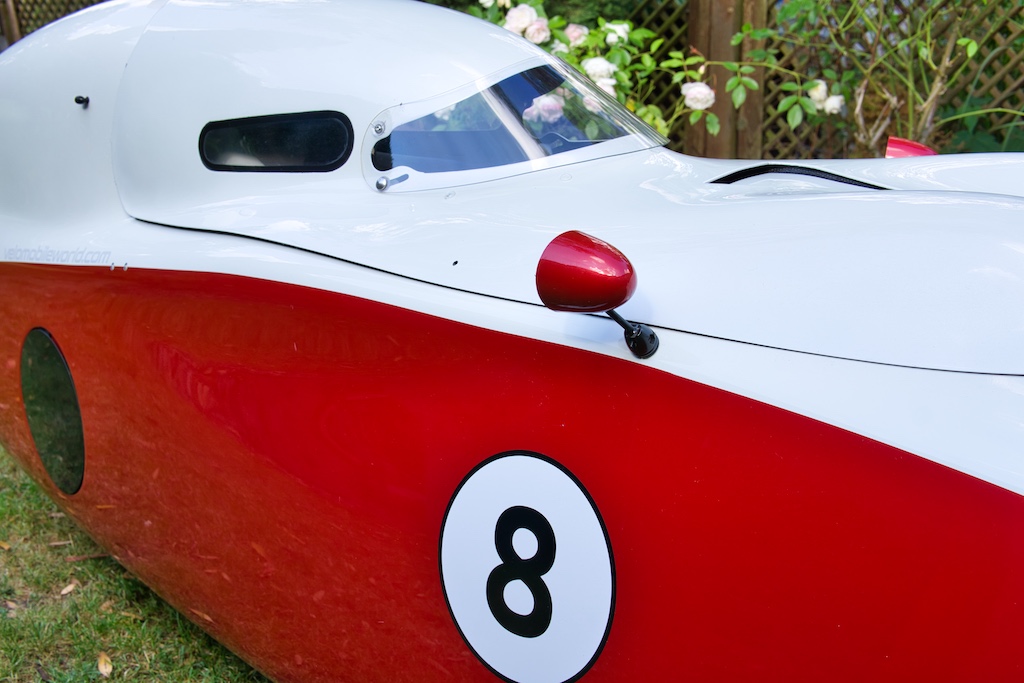 In recent years, many new velomobile models have come onto the market: The new Milan MK 7, the Alpha 7 or the Snoek. The Snoek was out of the question for me because the space available was too small and I would probably only just have fit in at 1.76 metres. Besides, it was brand new in 2021 and I didn’t want to go through any teething troubles.

In June last year, I test rode the Alpha 7 and the Milan SL at Velowerk in Siedenburg. In the end, I decided on the Milan SL for the following reasons: 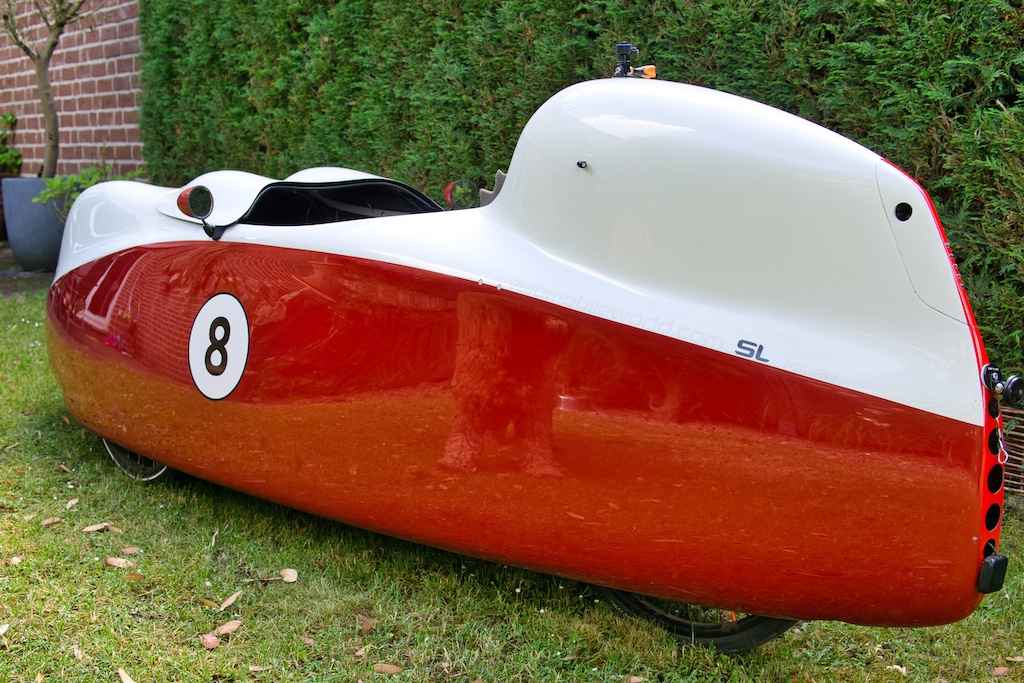 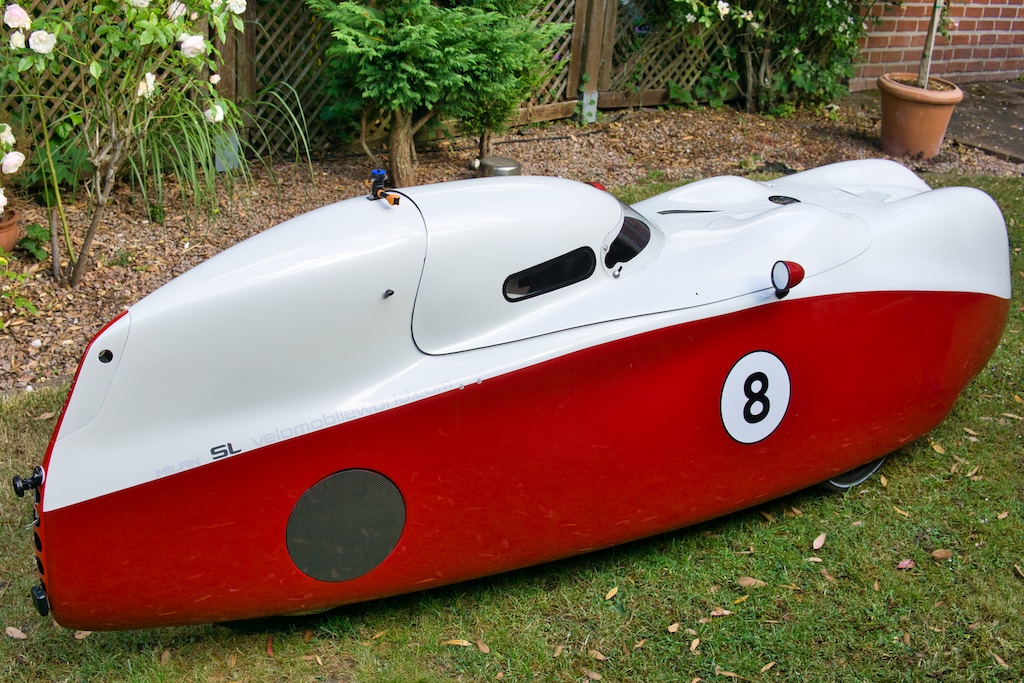 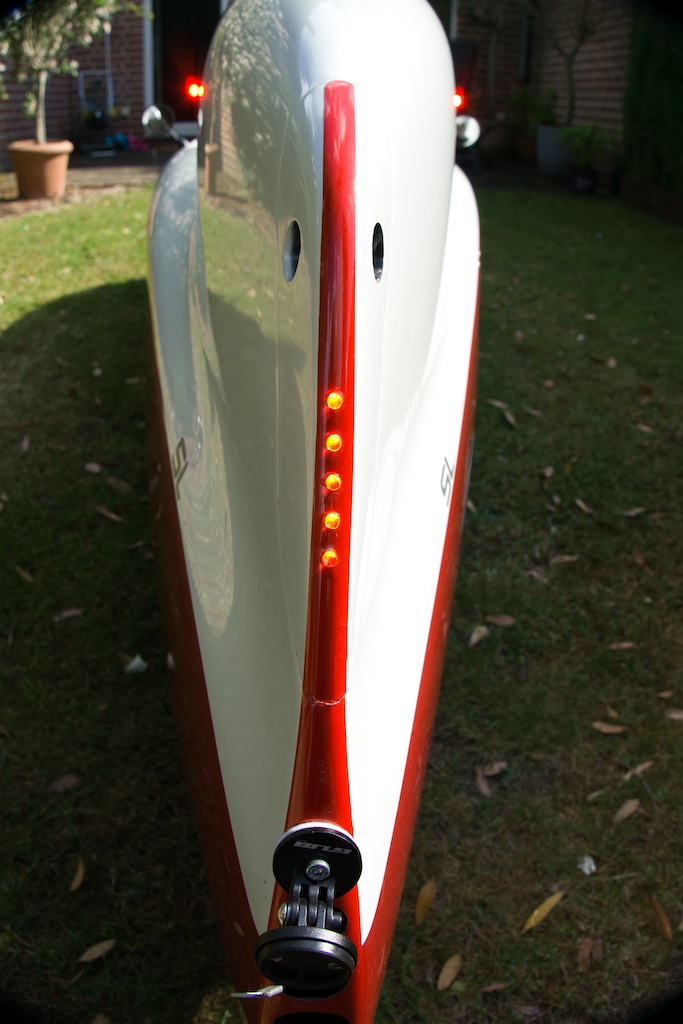 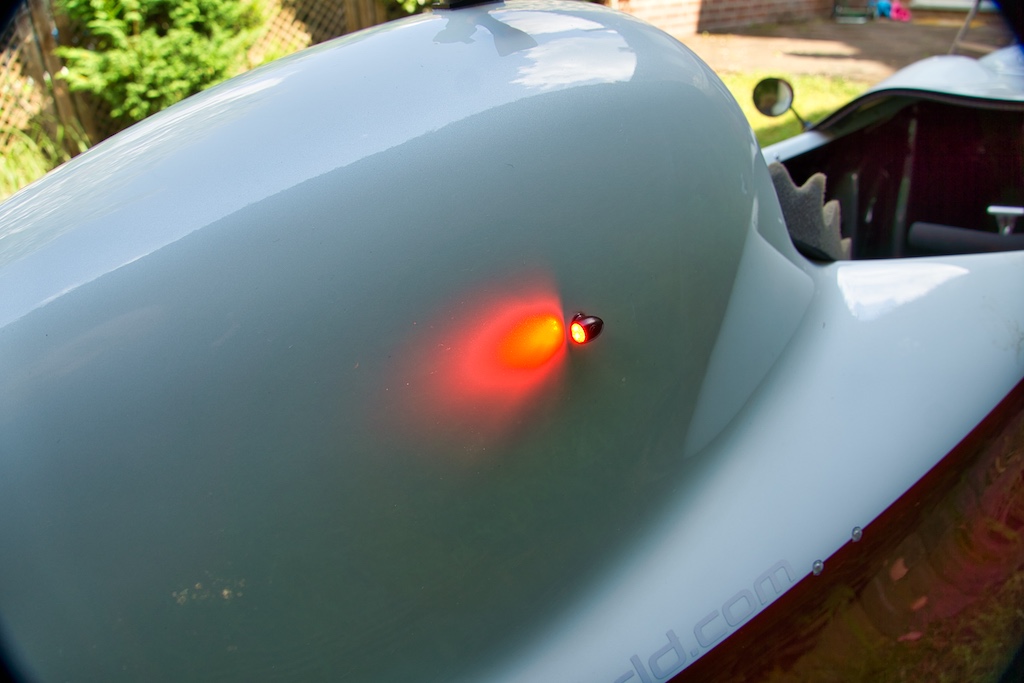 My first conclusion after about 5 months and 2,500 kilometres ridden

Sitting position:
As expected, it took some getting used to at first. My muscles in the lower back had to adjust … it took about 1,000 km, but now I feel like a million bucks.

As mentioned before … you lie much flatter in the Milan than in the DF or Alpha 7. Despite its sporty design, the Milan is extremely comfortable and therefore particularly suitable for longer distances. Feels like a well-fitting, tight-fitting leather glove!

Drive / Transmission:
After the first inspection, I changed the gear ratio that came from the factory. I now ride 65/39 in the front and 11/42 in the rear, so I can ride everything on the big blade on the flat. And when it gets hilly, the small chainring offers everything I need on the mountain. In extreme cases, I can master gradients with double-digit percentages at walking speed.

When shifting at the front, from the small to the large chainring, however, I despaired at first because the chain rarely or never wanted to go back to the large blade. But at the last 300 Brevet in the Teutoburg Forest I had plenty of opportunity to practise. The trick is to pedal very slowly when shifting up the front. The chain then climbs again fairly silently thanks to the climbing aids.

Riding the Milan
… is a dream. This is obviously the result of years of consistent development, because neither strong winds nor bumps in the road can get the Milan out of its stride – you feel as safe as if you were in Abraham’s lap. A little tip: Don’t try to counter-steer all the time … instead, just let it run; it takes a little getting used to at first, but the Milan corrects itself!

The suspension strut with air suspension certainly contributes to the great ride comfort, although I don’t have a direct comparison with the “normal” suspension in the SL.

The only annoying thing about the Milan is the noise level when the bonnet is closed, which is why I wear earplugs. I cut a cover for the rear chain shaft from the remains of an insulating mat. To prevent the hood from rattling on the bodywork, I put some felt sliders on it. That has definitely reduced the noise.

However, I prefer to drive open, i.e. either with the ying-yang hood or when it gets even hotter, without the hood at all and without the cover of the maintenance hatch at the front!

Bodywork:
The large entrance and hood make getting in and out very comfortable. Due to the flatter lying position, the overview in traffic suffers only minimally. When driving with the hood closed, it is pleasantly temperate in the velomobile even when the outside temperature is around freezing point. When it gets warmer outside, I’ll certainly ride with the Ying Yang hood.

The front wheel covers do add a few kilometres per hour to the speed. However, this makes maintenance, e.g. changing tyres, more complicated and the turning circle is noticeably larger.

At the rear, not only the standard rear light LEDs are installed. In addition, the two Kellermann lights shine, which also act as turn signals and brake lights! That’s where a thick battery is needed!

Other:
Since the hoods are made of carbon and thus strongly impair the GPS reception of my bicycle computer, I installed a GPS amplifier from the car accessories trade … works perfectly! 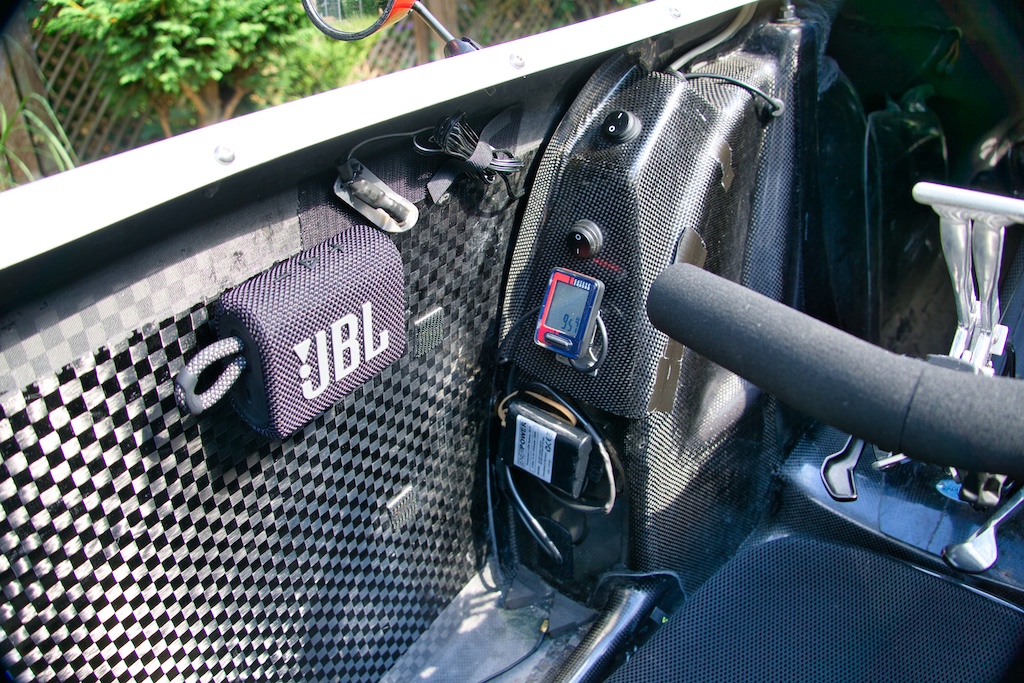 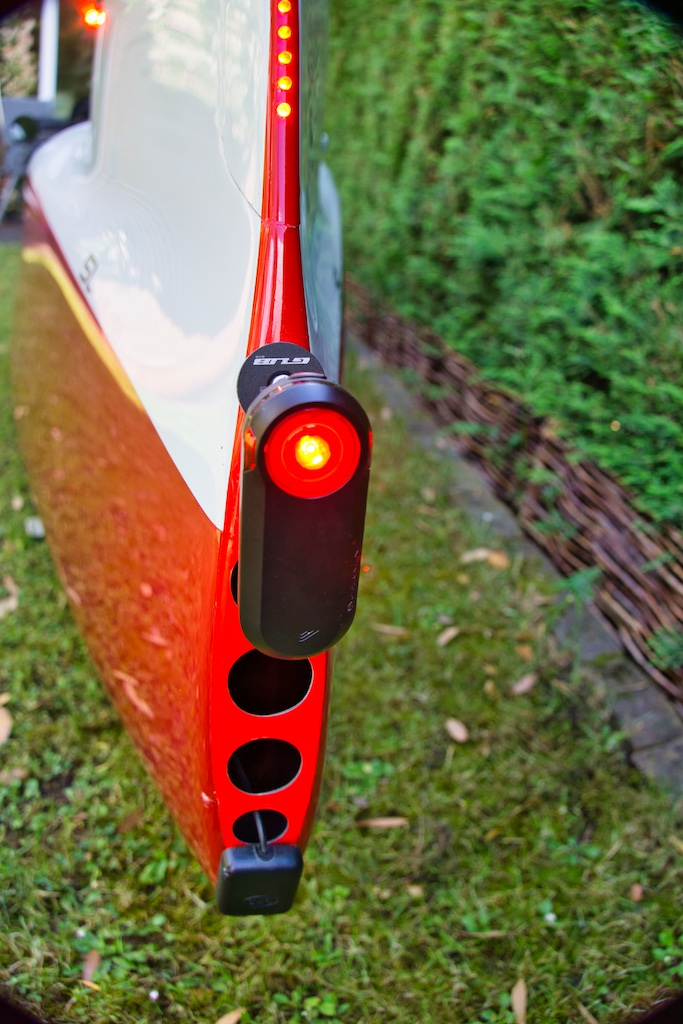 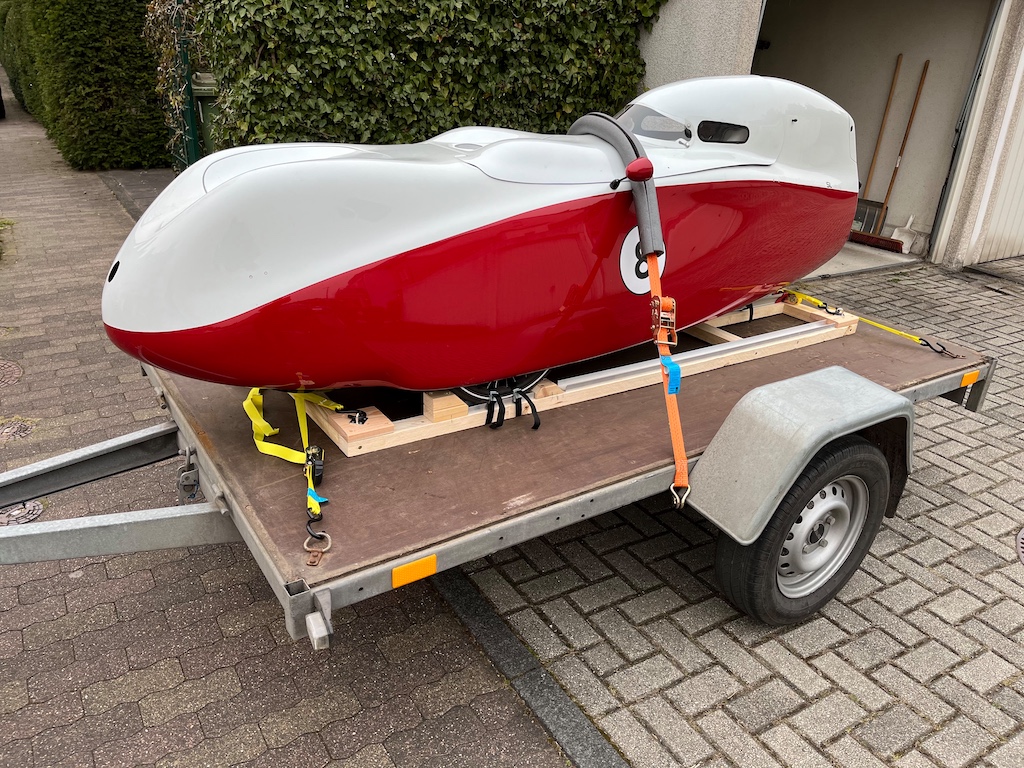 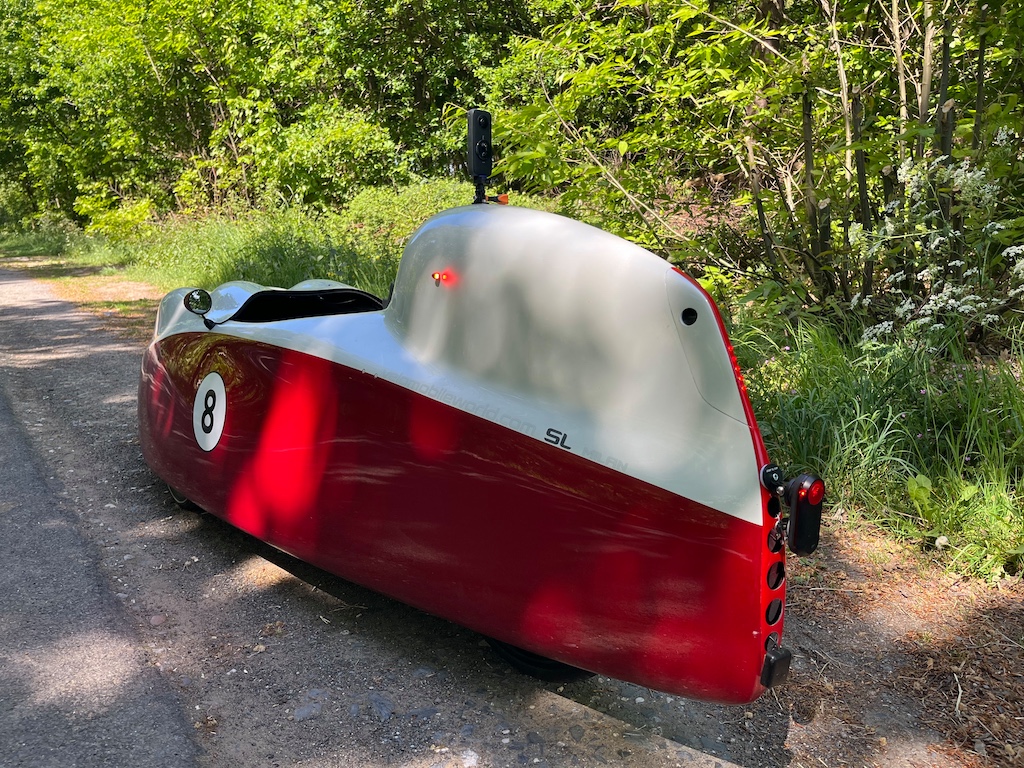 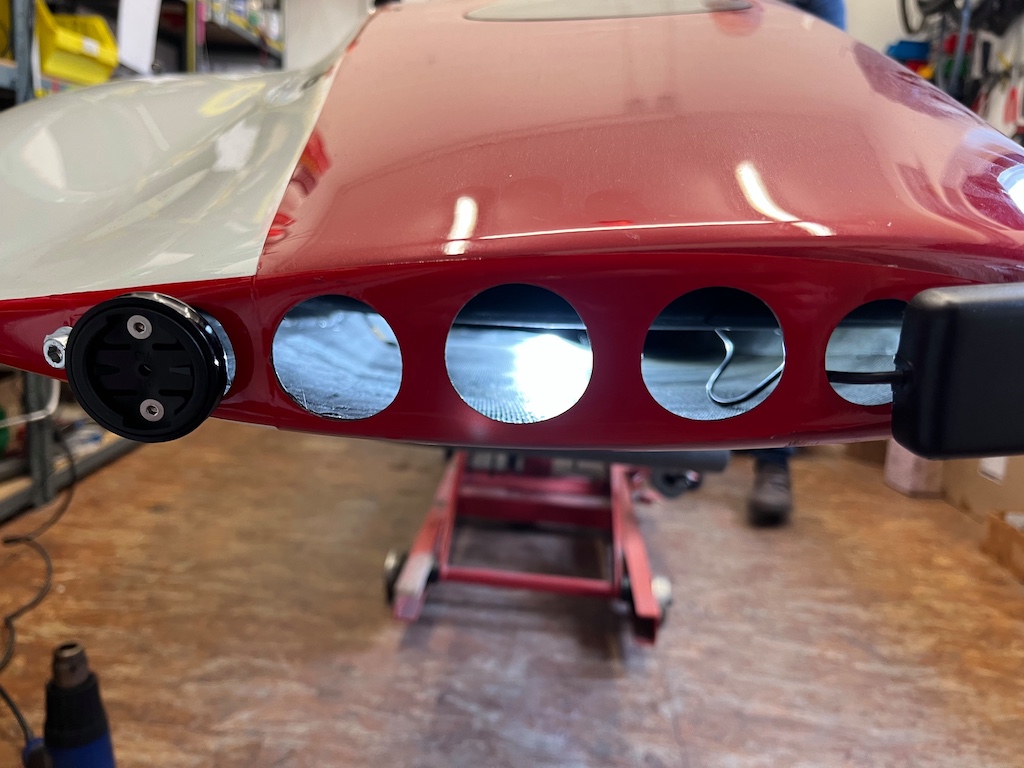 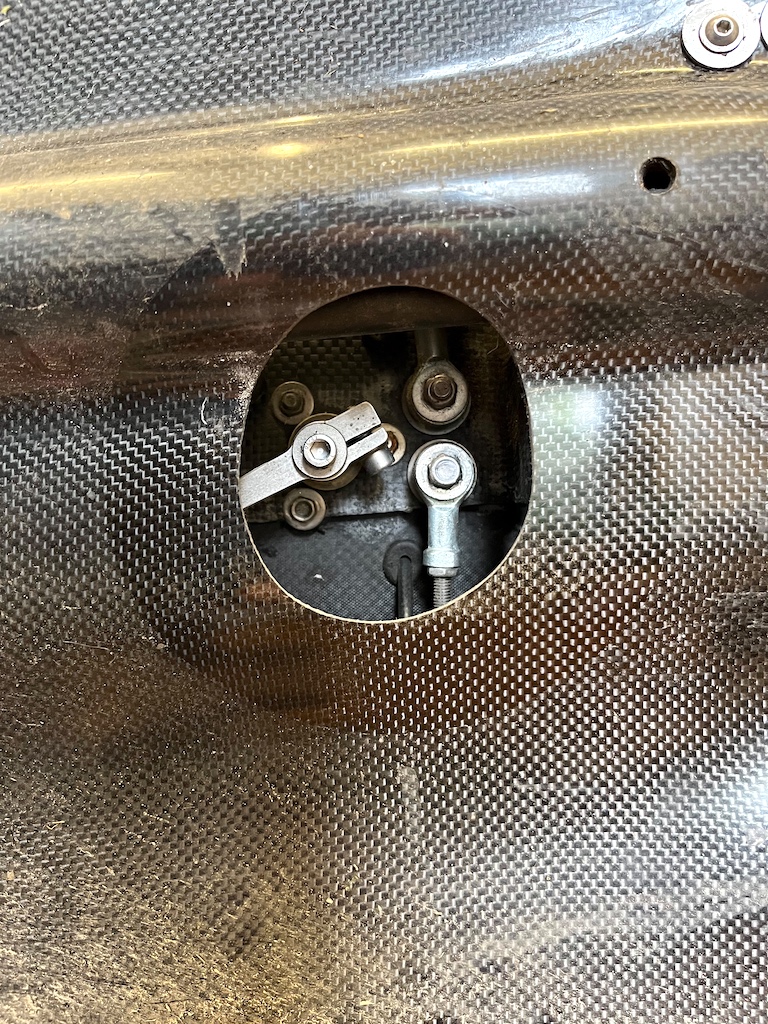 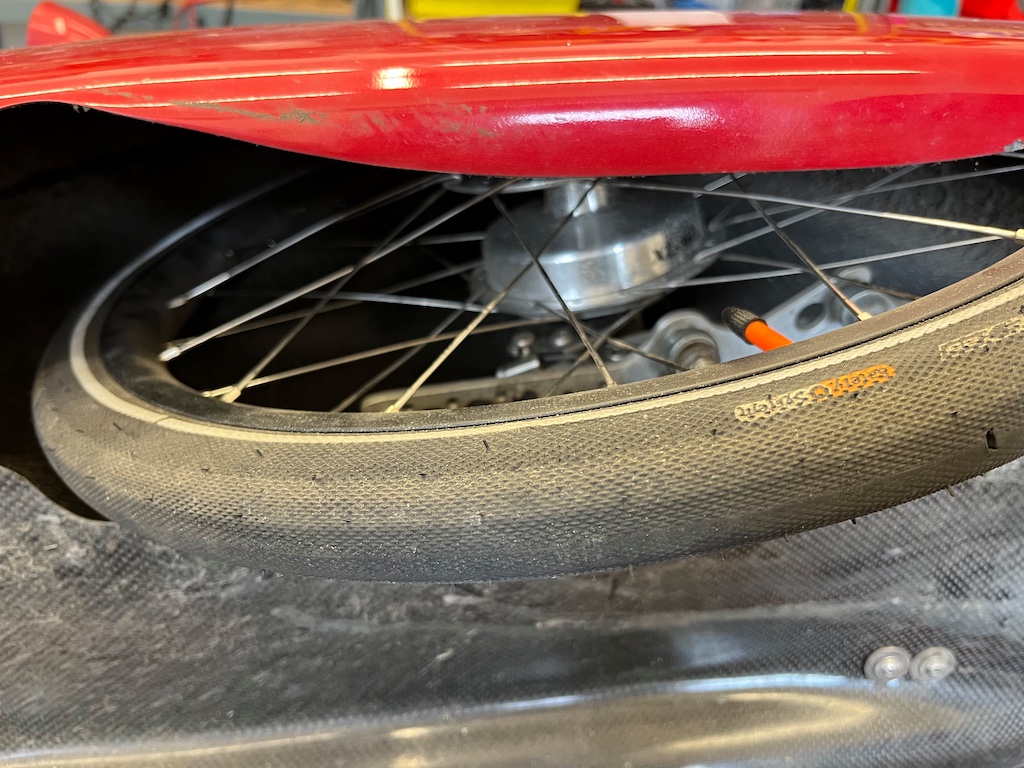 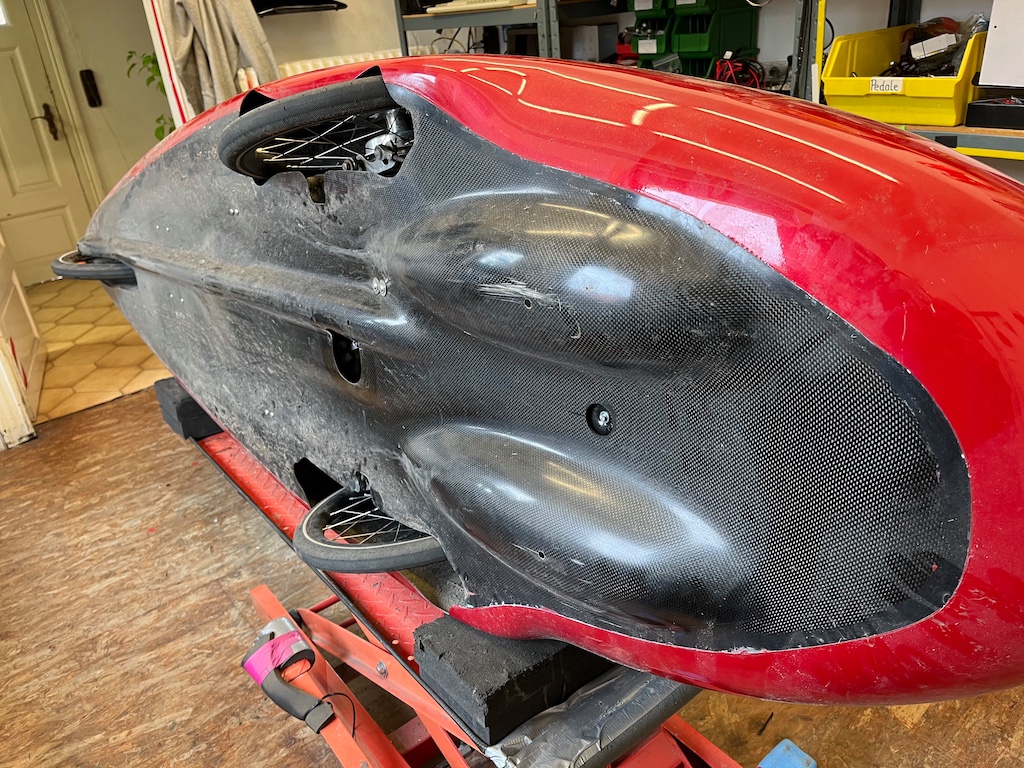