It’s Friday evening shortly before 9 pm. Normally at this time of night I’m sitting on the couch or already asleep. Instead, I’m at the start of my first 400. And then a night start!

Two weeks ago I started my first 300 here in Emsland; you can find a detailed report here. At that time I started early in the morning at 08:00 and finished around 23:00. Today I’m starting in the evening for the first time, so I’ll be running most of the time at night. To be honest, I have the most respect for that because I have no idea how my body will react to the lack of sleep.

The last few days I have been keeping a close eye on the weather forecast because thunderstorms with heavy rain, hail and squalls were predicted for the evening hours. Fortunately, this storm has since passed, but it was still quite windy and in the first few hours it was supposed to rain from time to time. There were between 40 and 50 fellow sufferers at the start; apart from me and another velomobile rider, there were only RR riders. 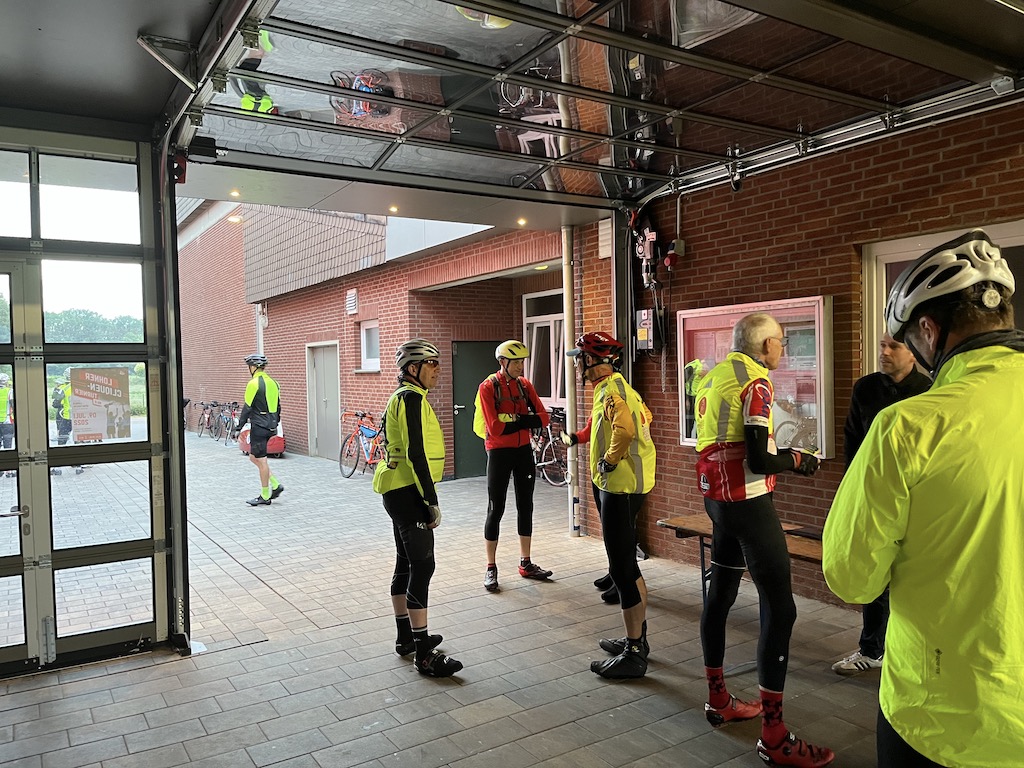 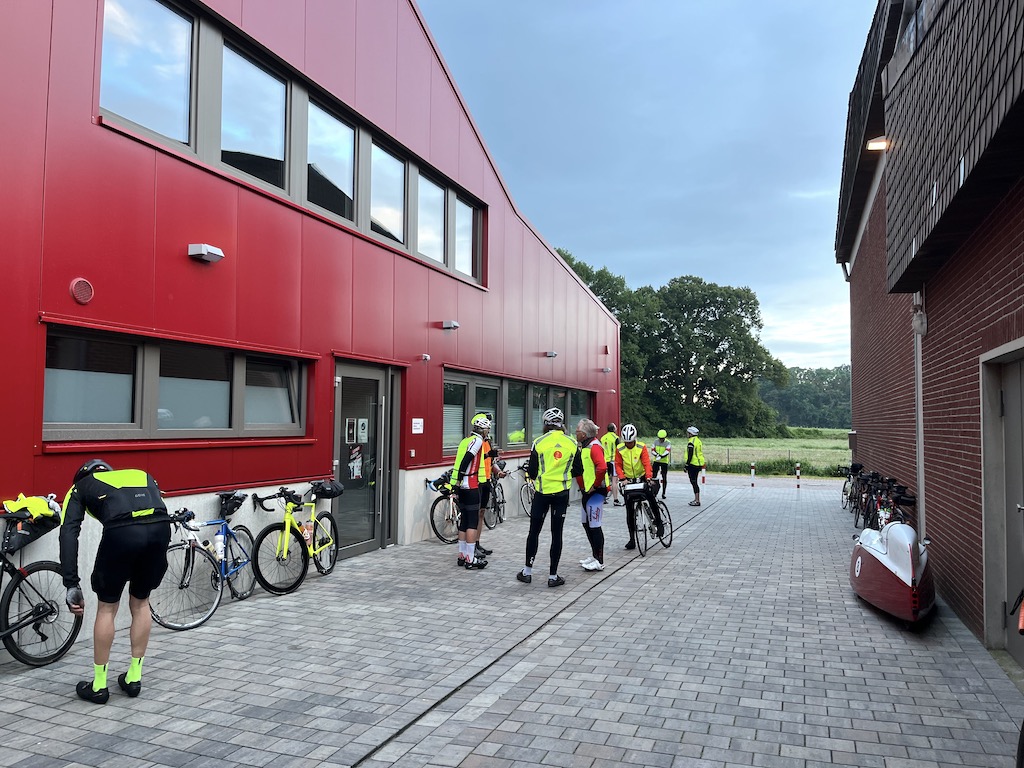 The race starts punctually at 21:00. The entire field of riders leaves the town united. Then it’s a slight downhill, which is the signal for me to pass the field of riders. Due to a slight bladder weakness, I have to stop more often than planned and the road cyclists keep catching up or pass me. Especially on the first long climb after about 80 kilometres, I have to let many cyclists go. I see most of them again at the first checkpoint after about 130 kilometres in Oelde. It’s a 24-hour petrol station where I get my first stamp. I will pass by here again for the third checkpoint. Before I am overcome by tiredness, I make it short: Just quickly step out, buy a bottle of water and a chocolate bar and continue towards the Sauerland. 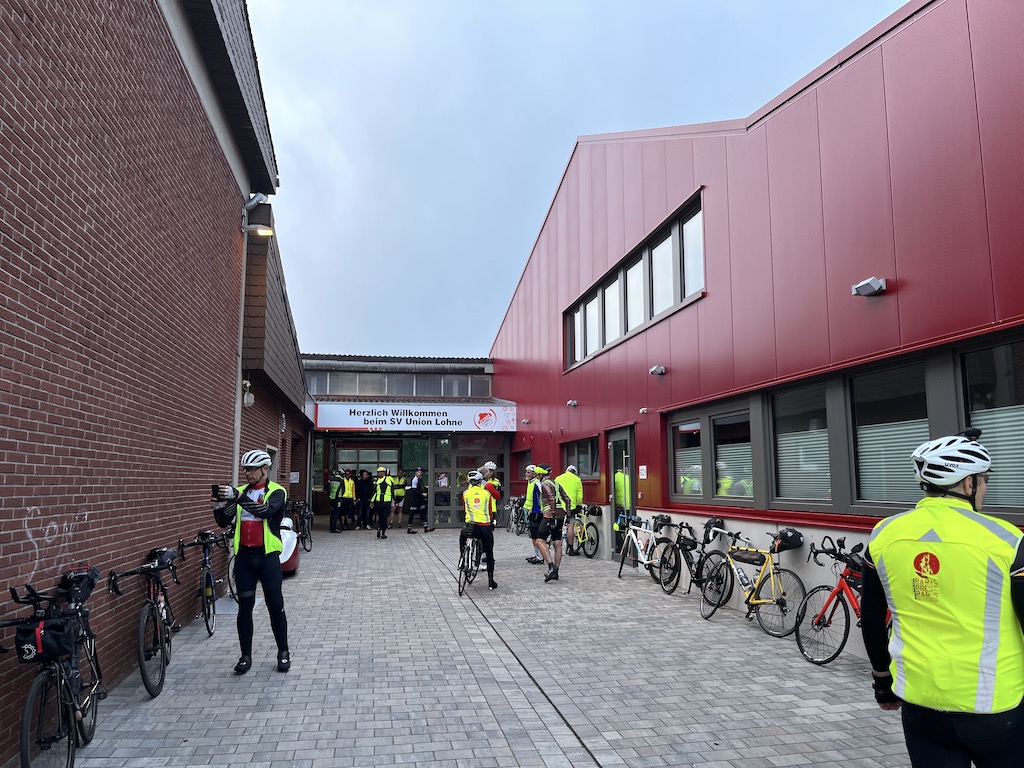 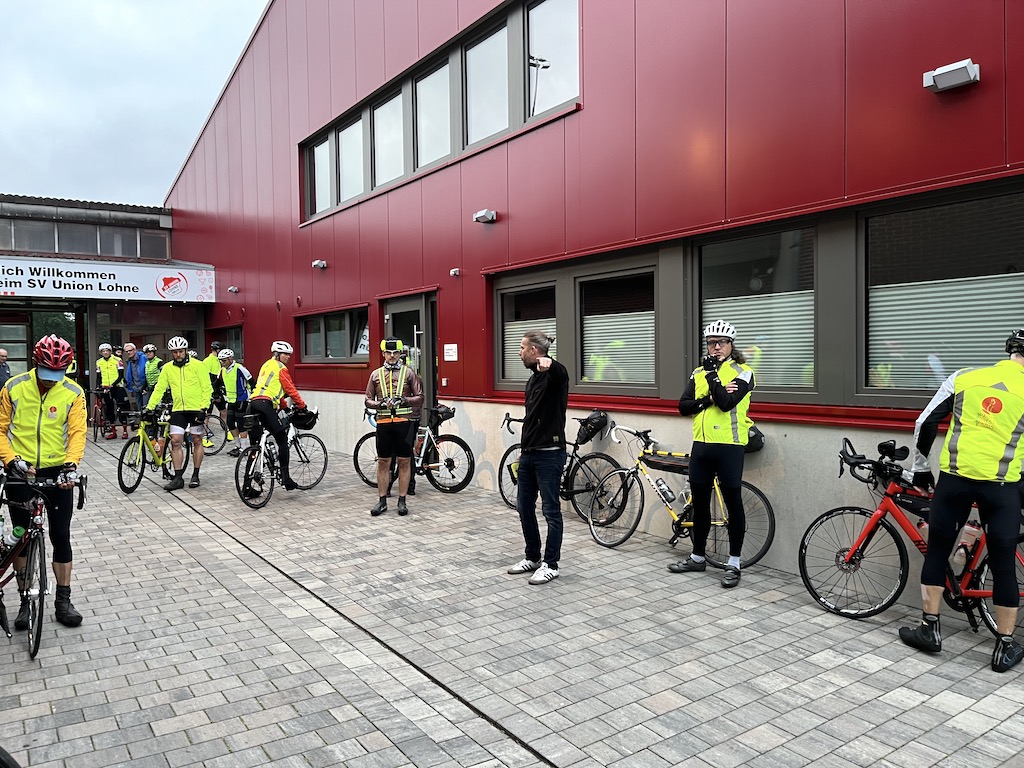 After about 170 kilometres come the first serious climbs. With the smallest gear ratio and the hatch cover open, I coast through the night. At dawn at 4:30 a.m. I pass Lake Möhne. Now it’s another 30 kilometres and about 1000 metres in altitude to the second checkpoint in a bakery behind Arnsberg.

Once there, I have breakfast with most of the other road cyclists and this time I take a little more time for some interesting and amusing conversations and a break. 2 cheese sandwiches and a large cup of coffee later I continue. As soon as I set off, the longest climb on this route awaits me. It’s about 7 kilometres uphill. Once again, I bravely pedal on and on and on with the hatch cover open and the lowest gear ratio. In the meantime, some of the road cyclists I had been chatting with overtake me again. For the next 50 kilometres I play a game of cat and mouse with two of them. As soon as the course goes slightly downhill or flat, I catch up with them or pass them, only to be caught up again on the next climb. This is repeated 5 to 10 times and each time we greet each other in a friendly manner; a welcome change! Then, after a total of 280 kilometres, the third and last checkpoint comes; it is again the 24-hour petrol station in Oelde, where I already got my first stamp about 7 hours ago. I fill up my water supply one last time, buy an ice cream and set off for the last 130 kilometres. 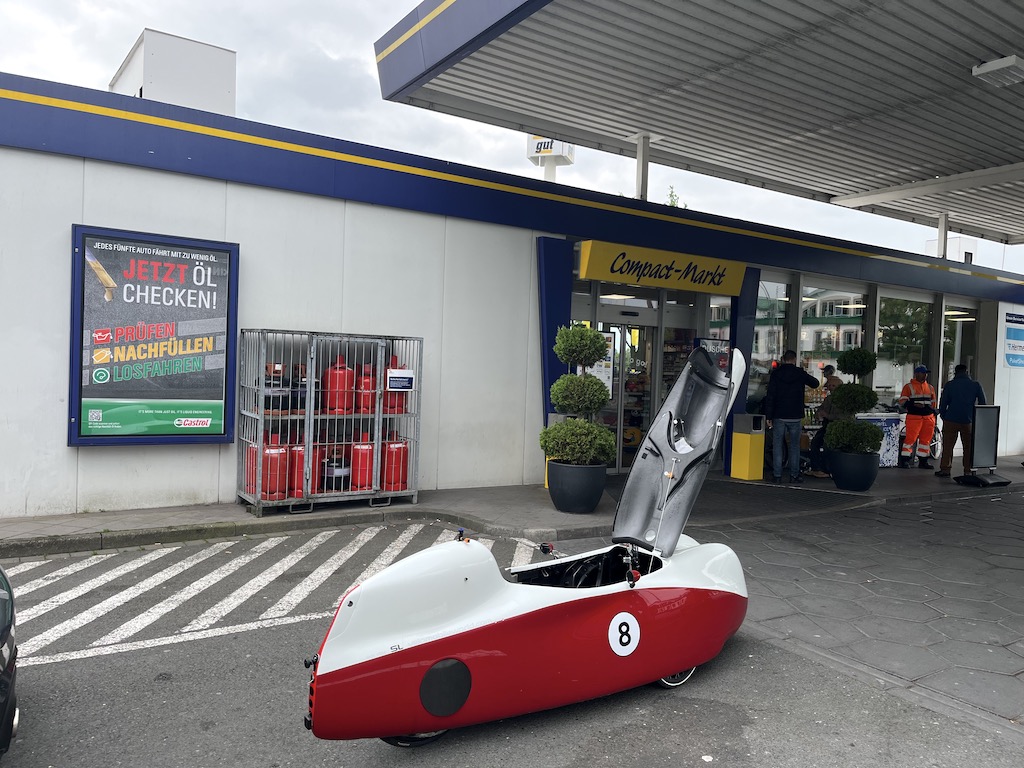 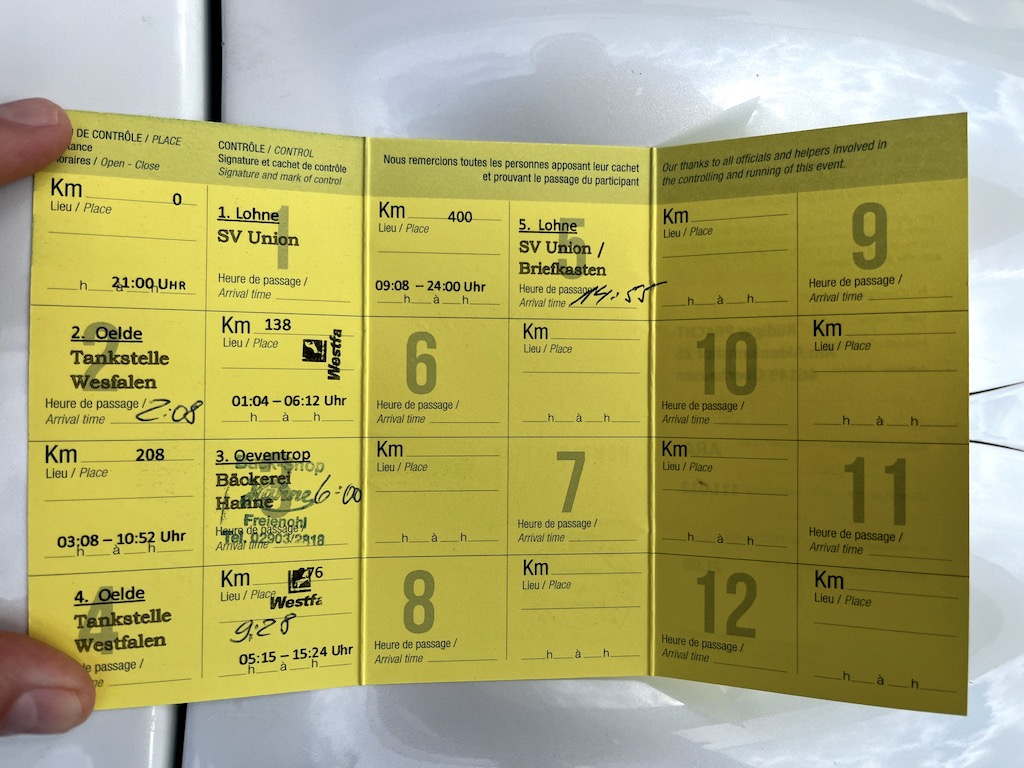 My family at home is also awake by now and regularly sends me encouraging messages on my mobile phone. I’m grateful for any motivation, because not only is my battery empty, I’m also getting increasingly tired. Luckily I have a bag of jelly bears with me, which gives me a further boost for the last stretch.

The car traffic has increased noticeably in the meantime. But apart from a crazy SUV driver who wants to tell me where to drive by honking wildly and gesticulating, everyone else tolerates my driving on the road and overtakes at a respectable distance. Thank you!

I count down the last kilometres … 350, 360, 370 … 400. Then, after about 415 kilometres, the longed-for town sign appears and after 417 kilometres, 2000 metres of altitude and a movement time of not quite 16 hours, I arrive at my destination shortly before 15:00. Finally, I enter my arrival time, put my stamp card in the letterbox, load the velomobile and head home. Not quite an hour and a half later, I arrive home too exhausted. I take a hot bath and fall into bed.

What can I say? I have to admit that I was totally exhausted. And compared to some other riders, I still lack quite a bit of fitness. But I did it! And considering that I’ve only been velomobile riding for 3 years, I can be more than satisfied with my performance. It also gives me new motivation to keep improving!

In 4 weeks the 600 will take place, but I don’t think I will participate. The last two brevets over 300 and 400 kilometres respectively have clearly shown my limits. After all, fun should also be in the foreground. This year I will certainly ride some “shorter” events and continue to work on my form. And knowing me, I’ll definitely try again next year.