In my search for a successor to my now 6-year-old Garmin Edge 800, I ended up with the Edge 520 plus, which has been on sale since April 2018. Compared to its predecessor, the Edge 520 (without plus), the new one has significantly more memory (16 GB) so that now, for the first time, reasonable OSM maps can also be installed. The navigation function is also new, although it is limited compared to full navigation systems. More details on this later.

What else can the new one do?

The 520 plus comes with numerous functions: many sensors are supported and by pairing with the smartphone via Bluetooth, call and SMS notifications, driver-to-driver communication, live tracking, accident notification, weather report etc. are possible. There are freely configurable data pages, fitness evaluations and the Garmin portal offers extensive statistics. And more features are available via the Garmin App Store Connect IQ. All further information such as manuals, updates etc. can be found here.

A word about the map material: With the Edge 520 there was a lot of criticism because of the factory-installed map, which is why many users first installed an OSM map (Open Street Map), which in turn was not easy because of the tiny device memory, because in the end there was only around 100 MB of memory space left for the map on the 520!!!! Fortunately, this is all water under the bridge with the 520 plus, because it has 16 GB of memory and a large OSM map of Europe with lots of details is installed ex works.

The first thing I notice when I unpack it is the size of the Edge 520 plus; even though its dimensions are identical to those of its predecessor … compared to my 800, it’s a pipsqueak. Or to put it positively: Nice and small, handy, light and inconspicuous. I think that’s great! When you rummage further in the original packaging, you find everything else that is usual: Aero mount, standard mount, fastening strap, USB charging/sync cable, quick start guide.

What is also immediately noticeable: the workmanship is super; nothing creaks, the keys are easy to operate and have a clear pressure point! The casing is completely welded and thus well protected from the weather. There is only one connection on the back: Micro USB, protected by a rubber tab. Unfortunately, this has 2 serious disadvantages:
1. the battery is permanently installed and cannot be replaced.
2. there is no SD card slot, i.e. the card can only be installed on the internal memory of the 520+. 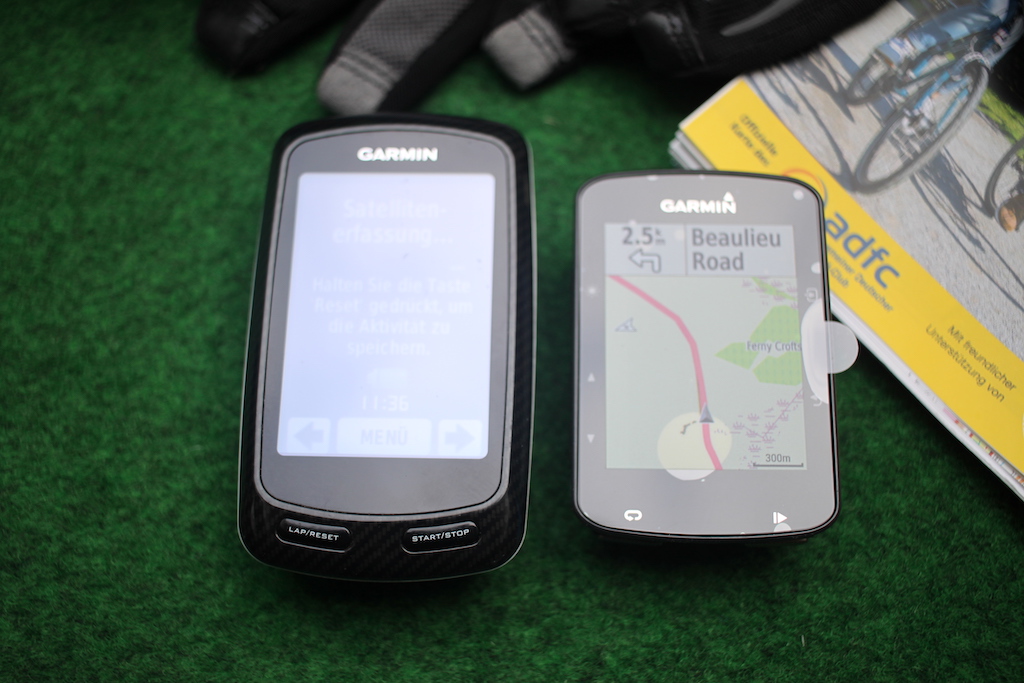 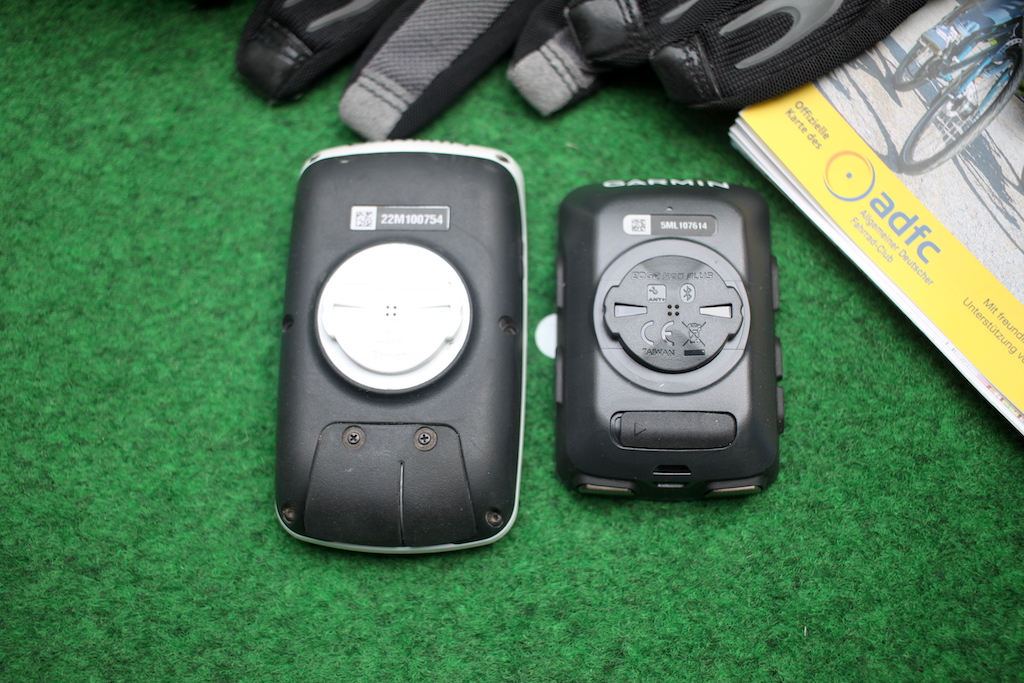 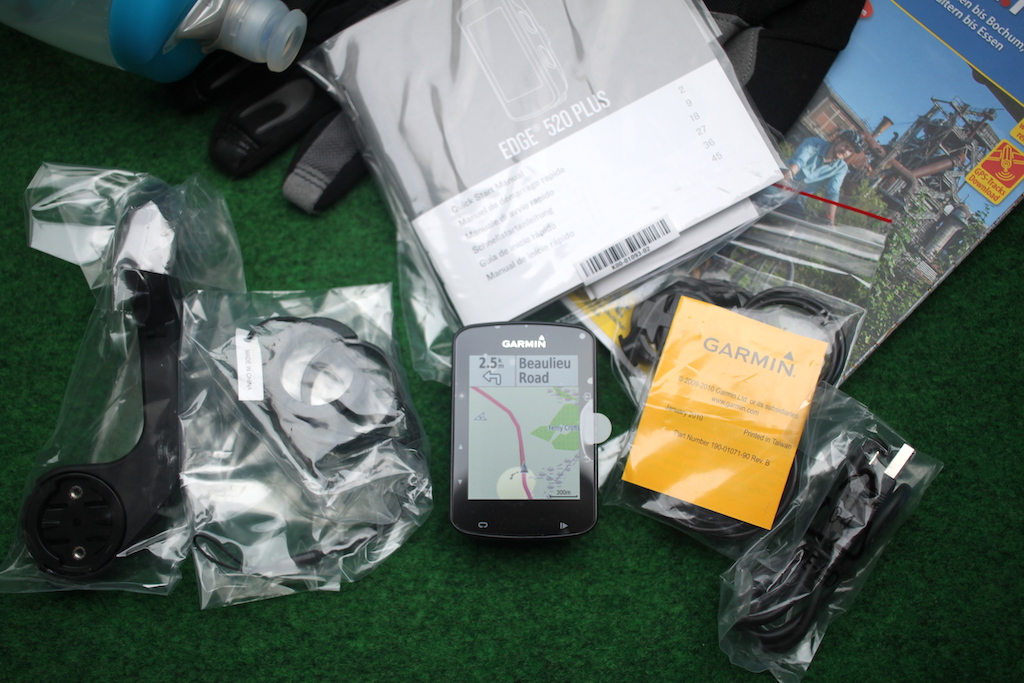 To be able to use online functions, I first installed the Garmin Connect Mobile app on my smartphone (iPhone X). I already had a Garmin account because I had already uploaded the training data of my 800 to the Garmin web portal. After pairing Garmin and smartphone, I “registered” my chest strap … all without any problems.

I found the linking of Komoot and Garmin a little more complicated. First I entered my Garmin account information in the Komoot app. Then I downloaded the Komoot Connect IQ app from the IQ Store in the Garmin Connect app and entered my Komoot account information there. If I now go to the IQ menu on my Edge 520 plus and select Komoot, I find all the tours planned on Komoot that I can select and follow!
This also works great on the road! Since you can’t enter a destination directly in the Garmin, I do it on my smartphone, save the tour, have it on my Garmin straight away and off I go!

I use the 520 plus on my MTB and in my velomobile. I don’t need many features at all, such as Group Track, Virtual Partner or training programmes. It is important to me that my tours are recorded and that I can evaluate them later. It is also important for me to discover and ride new tours, because nothing is more boring than riding the same route over and over again. I plan my tours on my computer at home or use tour suggestions from Komoot or other portals such as GPSies. Or I leave a previously planned tour on the spur of the moment and look back at home later to see where I actually came from.  All this works wonderfully with the 520 plus!

After a short time I also got used to controlling the Garmin via the 7 buttons; I don’t miss the touchscreen of my 800’ers, because cleaning or unintentionally touching the display often led to unusual reactions from my Garmin in the past. The display is very easy to read, provided the brightness is set correctly. The only point of criticism is zooming. With the 800 it was very easy thanks to the touchscreen. On the 520, on the other hand, you have to use the side buttons to navigate through the menu. However, I have activated the “auto-zoom” option anyway, so I haven’t really had to change the scale manually so far.

The battery life is stated as 15 hours. I can’t really confirm that, because my previous tours with the new Garmin lasted a maximum of 5 hours. But since I only charged the battery when it was actually almost empty, I would say that the 15 hours are realistic.

What the Edge 520 plus cannot do, and why it is often criticised, is “real” and independent route planning. This means that with the Edge you can’t simply enter the start and destination and then have a route created, as you can with a car navigation system, for example. But I haven’t missed that so far either. As I said … I plan my routes in advance at home. And if all else fails, I can always create a new route with my smartphone via Komoot and then quickly transfer it to the Garmin.

But what works great is “Back To Start”. For example, have you broken down and want to get home as quickly as possible? Or is a storm suddenly threatening? “Back To Start” calculates the fastest route at the touch of a button and brings me home either on the same route or on the shortest route.

Rescheduling a predefined route also works excellently! Missed a turn? You have to take a diversion because the route is closed? No problem, because the Garmin routes you back to the original route. Often I was told to turn around after leaving the route; I ignored it, just continued straight ahead and after a few metres the little guy had already calculated the new course.

With the MTB, I “only” have the directions displayed while I’m riding. In the velomobile, I also get the corresponding announcements via my Bluetooth speaker, which in turn is connected to my smartphone. This also works wonderfully and I don’t have to take my eyes off the route at higher speeds.

By the way, the satellite fix is also lightning fast. With my Garmin 800, it sometimes took 1 to 2 minutes; sometimes longer if it was out of service for a while. With the 520 plus, it worked within a few seconds and I even have partial satellite reception indoors!

I would like to highlight one feature in particular: LiveTrack! I have set my Garmin or the Connect app on my smartphone so that LiveTrack is automatically activated when I start a tour. My family then receives an email with a link and can see in real time on the map where I am or what distance I have covered. This not only saves me having to make enquiries or phone calls during the journey (“Where are you? When will you be home?” …), but also gives me personally the certainty that I will be found in the event of an accident, because I am often on the road alone. Somehow reassuring!

My conclusion after 5 weeks of intensive use …

… Small but mighty! That really sums it up, even though I don’t use all the features of the 520 plus. But what I did use was absolutely convincing: routing, display, recording of tours, interaction with other apps like Komoot and last but not least LiveTrack! I would also like to mention that I had no crashes during the whole time and that the pairing with the smartphone was quick and subsequently stable. And all that packed into a mini case! Speaking of the case: In the meantime, I have given the little one an armoured glass film and a silicone case. After all, I want to use it for a long time.

At the beginning I was irritated by the fact that the Garmin 520 plus needs 1 to 3 minutes for the complete calculation of imported routes, depending on the length of the route. But it doesn’t really bother me; you can still just start driving. I also didn’t like the position of the USB charging socket on the back! You can charge the Garmin while driving, but the socket is difficult to reach. But I have to admit, that’s complaining at a very high level!

A clear buy recommendation from me!

After about 5 months of intensive use, I have now parted with my Garmin Edge 520 after all!

It became more annoying when the activation of my favourite feature LiveTrack (see above) also worked … but then it didn’t work again. Garmin switched off again and restarted … so it always took several minutes until I could finally set off. In the end LiveTrack didn’t work at all!

The Garmin support was very helpful, but even the last update, which was supposed to fix this known bug in connection with iOS, only worked in the meantime … then again not etc.. I was slowly getting pissed off! After each failed attempt, I sent the log files to Garmin; the last time I received an email saying that the problem had been passed on to the development department … Response time unknown.

I then contacted my dealer who gave me a replacement unit. After the error still existed, my dealer kindly took back the Garmin Edge 520 and refunded me the purchase price! THANK YOU!

And now? First of all, I’m using my ancient Garmin 800 again; navigation I do with my iPhone, where I have Komoot installed. I am now a premium member of Strava (Summit) and have activated Beacon in the smartphone app, so my family can now track live where I am.

Garmin recently announced two new models with the Edge 530/830. The same goes for Wahoo with the Elemnt Roam. Maybe I should take a look at them! I’ll definitely let you know if there’s anything new.