that is the slogan of Lupine! For over 25 years, Lupine has been developing and selling lamps in Germany and is now something of a top dog and innovation leader when it comes to LED outdoor lamps. I bought my first Lupine (Wilma) over 10 years ago; it was damn expensive, but worth the money: first-class workmanship, huge light output with a small size and super customer service … these are my experiences.

And to say it right away … no, I do not work for Lupine. And of course I have tested other products in recent years, especially cheap lamps from China. I have also built lamps and batteries myself. But in the end I always returned to Lupine, because it’s not much fun when the light suddenly goes out during a tour and in the middle of nowhere! But also because the products always fascinate me.

But let’s get to the actual topic; the test of the Lupine SL A! It is the first front light from Lupine to be approved for road use! When I’m off the road, I use my Lupine Piko or even other front lights that turn day into night in the middle of the countryside. But when I ride my bike or my velomobile on the road in the dark, I already make sure that I don’t have a “glare grenade” on my bike that affects oncoming traffic, even if you point the light beam at the road.

That’s why I bought the SL A4 with the “small” battery, even though the promised 900 lumens of light seem rather low to me. O.k. compared to other roadworthy lamps, e.g. from B&M, 900 lumens seem a lot, but my old Piko already had 1,400 lumens; the current model even 1,800! So I was sceptical!

The lamp is delivered in a high-quality, huge cardboard box … typical Lupine. The scope of delivery includes: 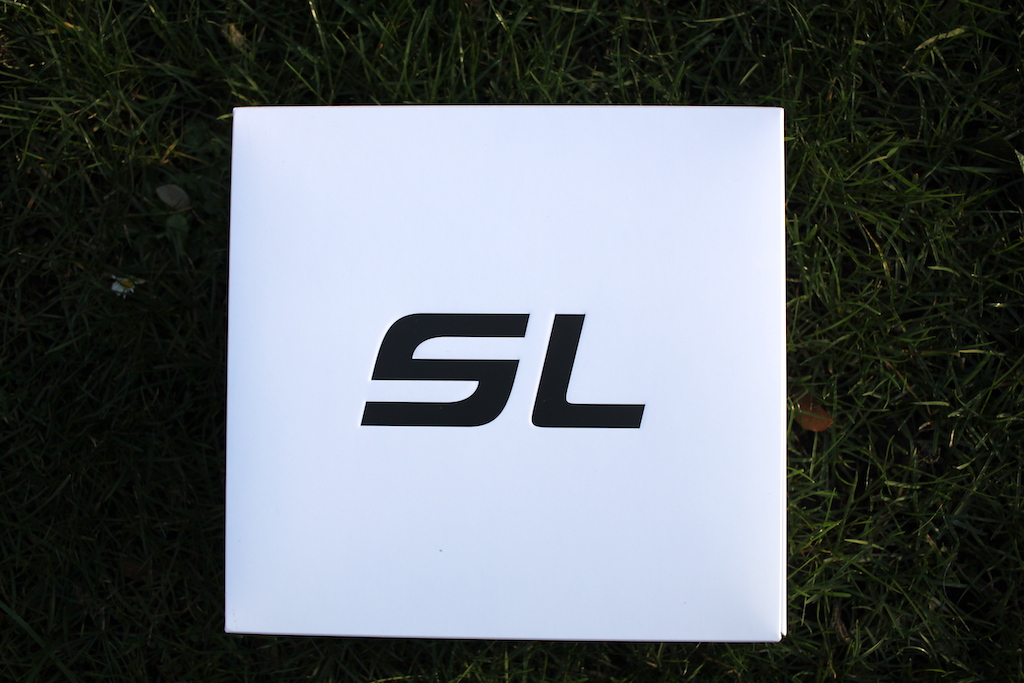 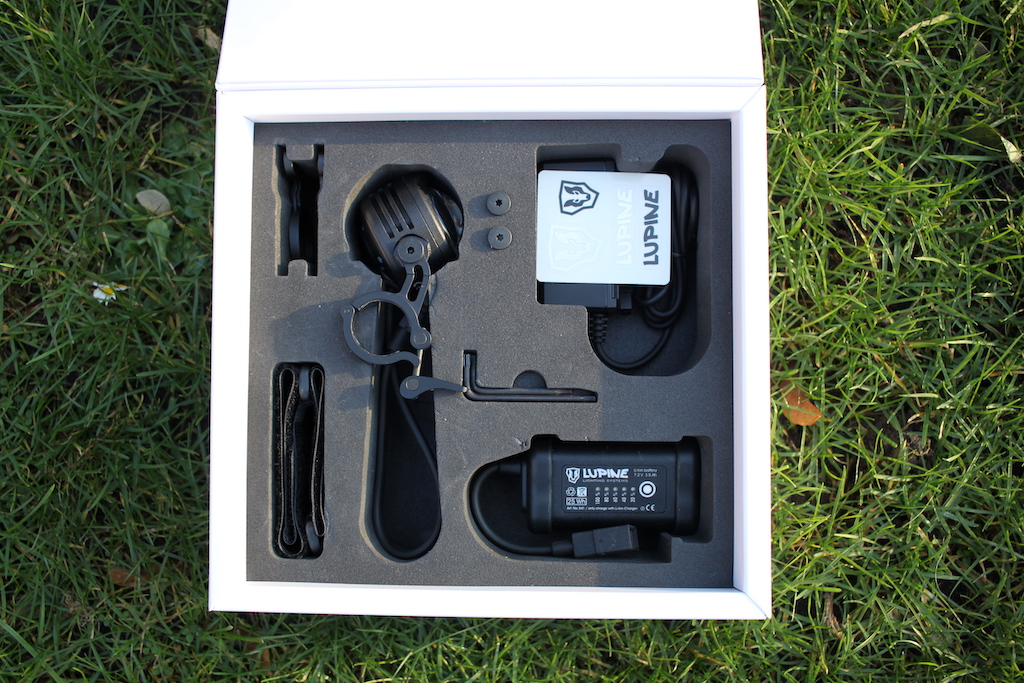 After switching on the lamp, the LED in the switch signals what voltage is present and whether the battery needs to be charged. I.e. you can tell what state the battery is in by the colour of the LED and by counting the flashes. But that is too complicated for me! Fortunately, I have a SmartCore battery; at the touch of a button, it tells me the charging status visually and acoustically. That’s great, because I don’t charge the battery after every ride, so I’m always on the safe side! By the way … the battery can also be used as a rear light!

I found the operating concept of the lamp a bit confusing at the beginning, because the lamp has a sensor and switches automatically between night light (LED lights BLUE) and daytime running light (LED lights GREEN) depending on the brightness. I was curious whether I would like this in practice. 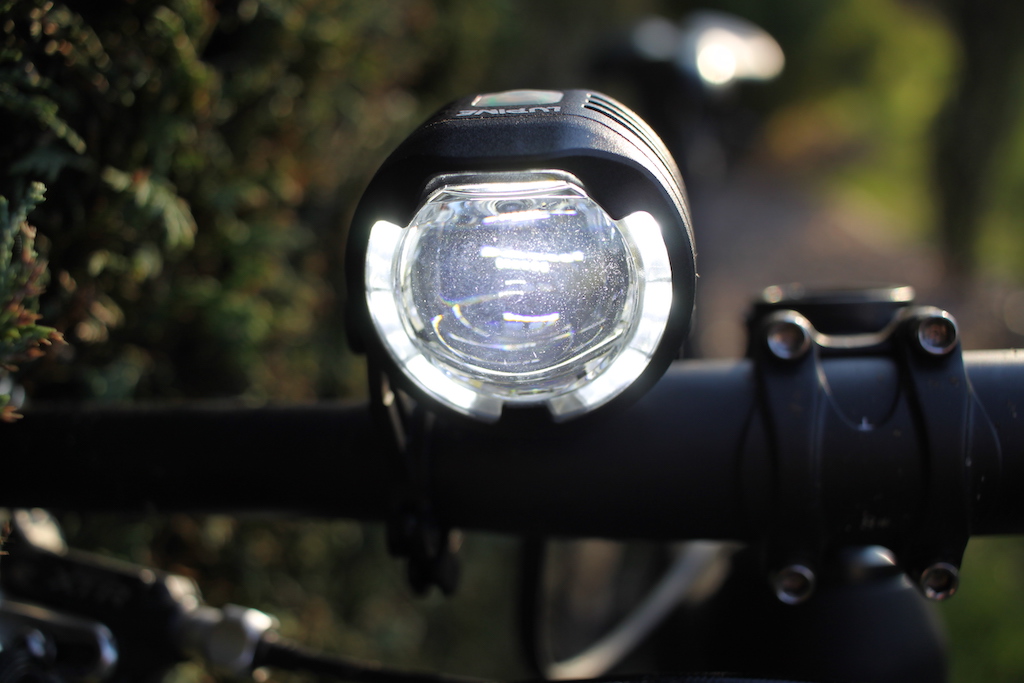 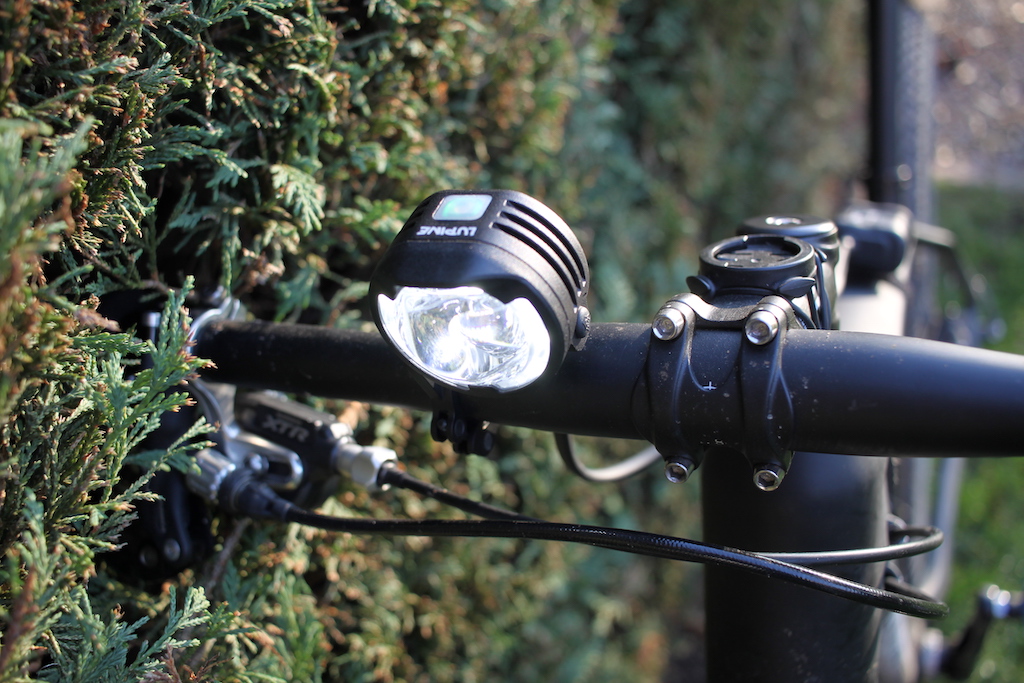 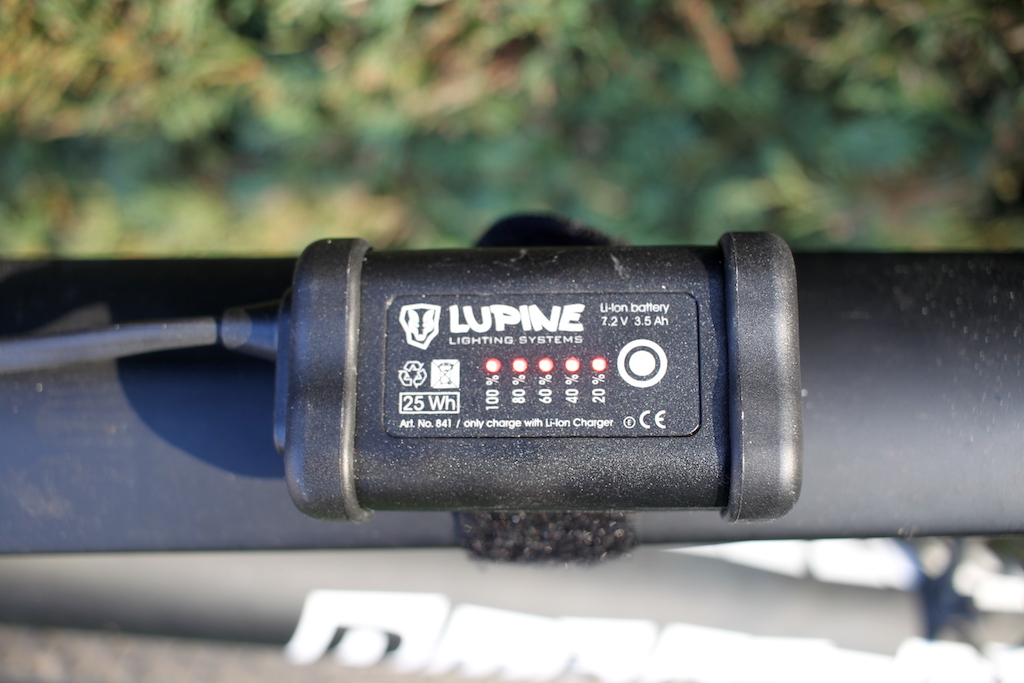 … in the dark, of course! After switching on the lamp, it automatically switches to maximum light intensity with 16 watts and 900 lumens. The first impression is absolutely positive: the lamp conjures up an extremely bright, symmetrical and sharply defined carpet of light on the asphalt! It’s hard to believe that it’s really only 900 lumens! But before I finally set off, I first have to adjust the inclination of the headlamp.

On the road in the dark, I can “only” switch between 8 watts (500 lumens) and 16 watts again by pressing the switch and thus influence the lighting duration at the end. Theoretically, the battery lasts 1.5 hours at full power and 3 hours at half power. Only when it gets brighter does the lamp switch on its own to daytime running light (1.5 watts); then the lamp reaches 16 hours of lighting time. I have to admit, at first I was not enthusiastic about this automatic system, because I prefer to have something like this, in the truest sense of the word, in my own hands. There is also no provision for control via Bluetooth. But after a few rides, I quickly got used to the sensor control. The change between day and night light happens with a delay of several seconds … but this can also be adjusted. Just like the brightness limit at which the lamp switches!

Lupine designed the SL A along the lines of a car headlight and installed an aspherical lens system … and it works! So far, no car or pedestrian has felt dazzled and complained; I know it differently. The only disadvantage is that some tight bends are not completely illuminated.

On the road in the dark

And this is how it looks when I’m on the road with the velomobile and the Lupine lights my way: 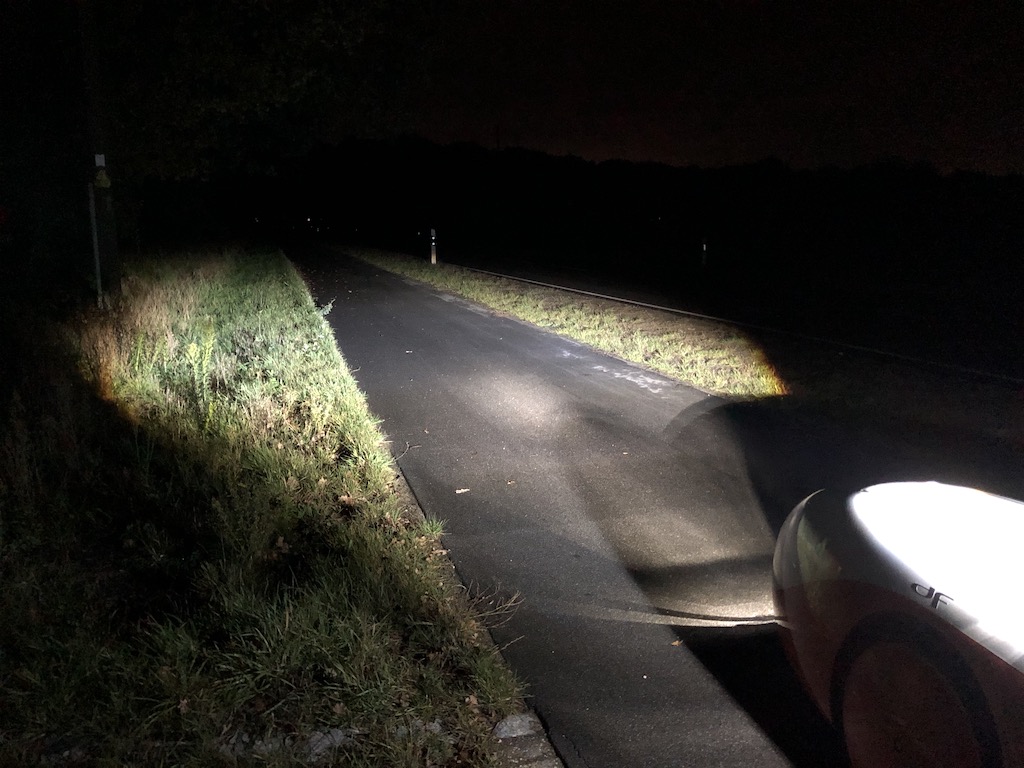 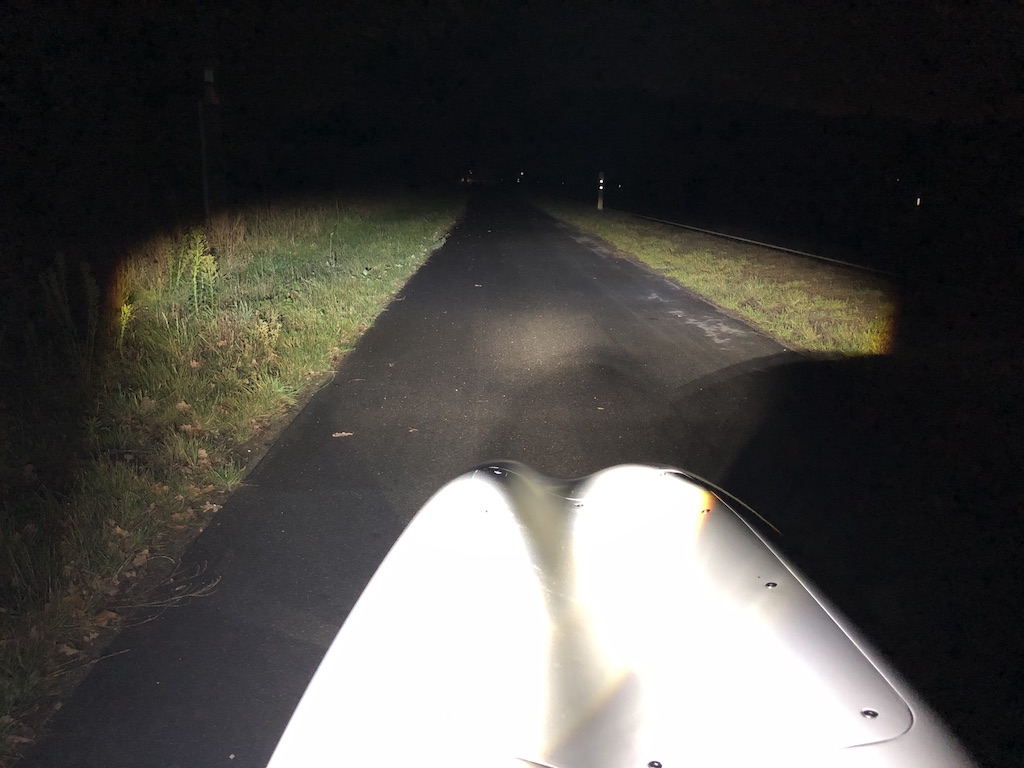 First conclusion after a few days

339€ (RRP) for the Lupine SL A4 is a lot of wood! But for that you get a small, extremely well-made lamp with impressive luminosity and approval for road use! I feel safe with the Lupine SL A in the dark even at high speeds on the road bike, because it casts more than enough light ahead without blinding other road users. By the way, I also use it during the day, because the daytime running light makes me more visible. Small tip: If you use several bikes like I do, you should definitely get the quick release.

A few weeks ago, Lupine launched the SL AF. The “F” stands for high beam; i.e. at the touch of a button, the lamp flashes with 1,300 lumens and is thus also ideally suited for off-road riding. The price starts at 420€.